After several Monopoly games with my flatmates I wondered about the “mathematical luck” that was involved in the game so I created a Monopoly simulator and emulated up to 1,000,000 turns in a 4 players game which shows that the game has a big luck factor for every player although there are very interesting facts that can help you in having a higher chance of winning the game. I am assuming that you already know the rules and have a solid strategy playing the game.

Street names are based in the London (United Kingdom, with Mayfair) board edition although the colours and positions of the lands are the same for all Monopoly versions so you should have no problem reading the report. Here’s how it looks for your reference:

– Trading is a human to human interaction and a good people strategy is highly flexible. Do not criticise anyone and keep quiet during the game, you do not want to appear as an asshole or be hated. Focus on your partner’s benefits when selling and be positive and polite.

– When trading, consider a mortgaged property to be MortgageValue+(TotalValue/1.5).

– Make low trading offers to players (bad for them), they will usually decline. Then wait until they need the money and tell them again, they will not see it as bad as before.

– Never trade if you benefit a potential opponent the same or more, he is nothing more than your enemy in the game and will eventually try to destroy you with it.

– Save money to pay for the highest rent you may need to pay in the next 3 moves.

– Spend money the latest you possibly can to avoid surprises and nasty debts.

– It is wise to mortgage at the beginning of the game (for buying more land, houses or paying debts) but keeping at least 20% of them unmortgaged (for houses and emergencies).

– Stations and Utilities are a great asset at the beginning of the game until people start building 3 houses.

– Get to 3 houses as soon as possible, rent increases substantially from 2 to 3.

– It is better to separate your buildings and higher rents along the board as much as possible instead of focusing on a “death passage”.

– It takes from 6 to 10 rounds for a player to go through the board and get through GO.

– The rents go higher as you go to the end of the board (scroll down for charts).

– Our brain is limited so the less you need to guess, the more accurate and precise your moves will be.

– Agree to play the official rules every time you can, the more you play to the same exact game, the better your brain is at predicting the best strategy and predicting old mistakes.

– Learn and set all the house rules before playing, this will not only avoid future confusion but help you in decide your strategy better.

– The official rules do not require you to pay rent if the owner doesn’t claim it.

– The official rules say you can buy and sell buildings before and after each turn, not only yours. Wait until people are close to your lands (see The dice probabilities below) to invest in buildings.

Since we are playing with two dices the probability is not even at all. The following graph shows the results obtained after throwing 2 dices 1,000,000 times: 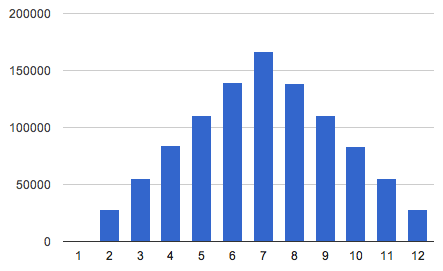 Not a lot can be done with the dices but it is interesting to know that 6, 7 and 8 are the most probable results when throwing two dices, good for estimating future strategies and focusing your brain power in the most probable situations.

This chart shows you the chances of players landing in each land/position in the board (4 players played 100,000 rounds each). Turns skipped when in Jail have been calculated (including the chance of getting out too): As you can see, lands after Jail are visited more frequently so you should really focus to acquire these lands.

When buying land and building, this is the profitability of the rent (ignoring utilities and stations). 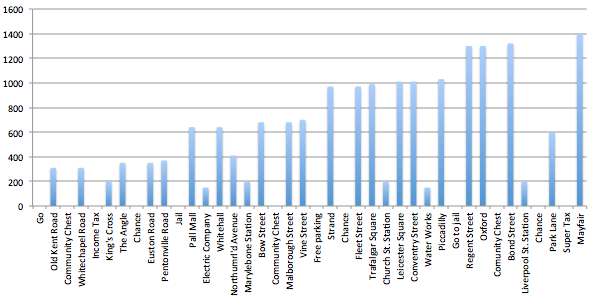 These charts compare the profitability of earning rent based on the times players land on them (100 rounds): 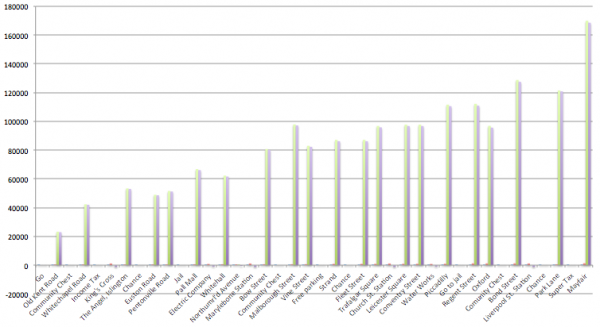 I keep adding interesting charts and tips to this report every now and then so you may want to bookmark it or share it for future reference. Feel free to comment or add your own tips in the comments.

The full code for the Monopoly algorithm is available at GitHub as a PHP script, if you know PHP programming feel free to extend the investigation with your own calculations so we can discover the most advanced tricks in this game and post them in the comments or send me an email to add your contribution and credits to this page.