Sublime Text 2 is the best code editor that exists right now and I’ll show you why. In this article I am going to walk you through what this editor is and how to set it up quickly.

Why should I switch to Sublime Text 2?

There are many programmers like me who started learning how to code websites in Macromedia Dreamweaver or even HomeSite, not for any special reason but by that time (more than 10 years ago) it was simply the most popular decent editor you could find that had a complete set of features. And after using it for years I didn’t really feel like leaving my comfort zone, it was a hard decision because a code editor is something developers use 8 hours a day. It would mean a learning curve to getting used to the new editor which could take some time, something that we don’t usually have. In one of my former jobs they all coded with jEdit and it was a powerful software yet the fact of being run as a Java app wasn’t something I liked, it felt a tiny bit laggy and irresponsive. A few years ago I purchased Coda and after a while I had to go back to Dreamweaver’s features I couldn’t live without like a fully featured and integrated SFTP server, as-you-code typo correction, Regular Expression Find & Replace and some more. Since then I just went back to my old loved Dreamweaver and that would be it. A month ago I decided to have another every-so-often “Let me check if someone released something better?” and started finding a very huge amount of coders commenting about other code editors, a lot of these had very active communities too. So after debating between Sublime Text 2, TextMate and Espresso I decided to give Sublime a try. It has an unlimited free trial version with all the features so hey, why not just try it for a day and see if it is worth the change?… 30 minutes later I had everything customised looks, features and project/server setup. I had already started coding and completely amazed. Here’s a screenshot of Sublime with custom skins and code highlighter (more later). Dreamweaver coders will find this screenshot familiar: 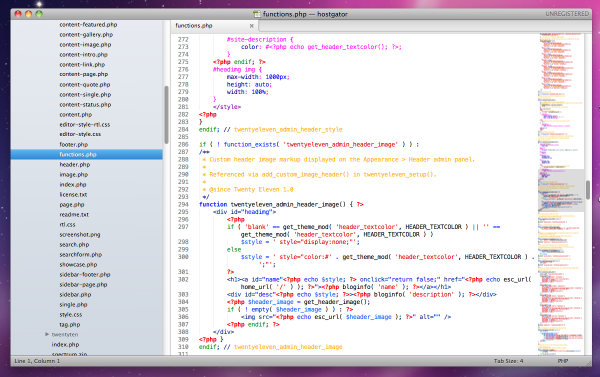 Reasons to switch from Adobe Dreamweaver to Sublime Text 2

This article will show you why you and your team should switch now to Sublime, I’ll be comparing to Dreamweaver although this applies to other code editors as well. If you read to the end of the article you will have a fully configured Sublime ready to rock. These are just some of the reasons why you should spend 15 minutes today to set it up:

Setting up Sublime Text 2 from scratch to awesome

We’ll separate this tutorial in 5 steps:

Next we are going to get some nice plugins, install Sublime Package Control which will allow us to install/uninstall all the plugins quickly. 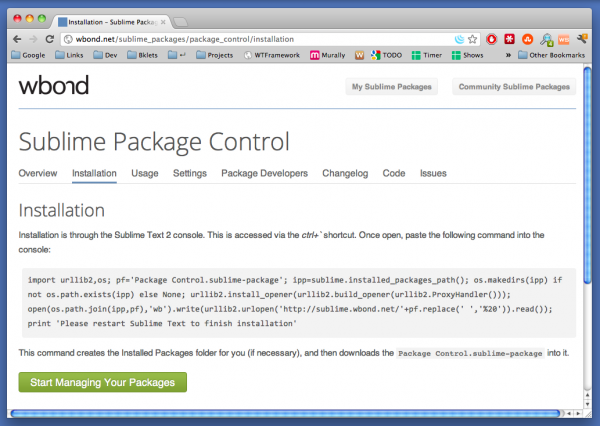 Then go to Sublime and press Ctrl+` to open the console (in a Spanish keyboard use Ctrl+º), paste the code above and press Enter. Restart Sublime (it will load faster now than the first time you opened it).

Remember this: Cmd+Shift+P and press it.

This opens a list of all-the-actions you can do in Sublime (nice!). Start typing “Package Control: Install Package” and select it. I code in HTML5, CSS, JavaScript and PHP so the plugins below make perfect sense to my workflow. I also try to use the minimum amount of plugins. Google around to find some nice ones for you.

The FTP/SFTP plugin (not free but has a free unlimited fully-featured trial too) has native File Comparison which is great, with Dreamweaver you had to enable File Comparison through an external application. Also, Dreamweaver’s FTP is so slow… uploading every file takes ages: Connecting to Server… Waiting… Listing folder… Waiting… Checking file… Waiting… Uploading file… Done. Sublime SFTP plugin uploads files in 1 second:

Essential. It auto-selects the active file when changing tabs and displays a lot of useful actions when right-clicking a file or folder in the list: 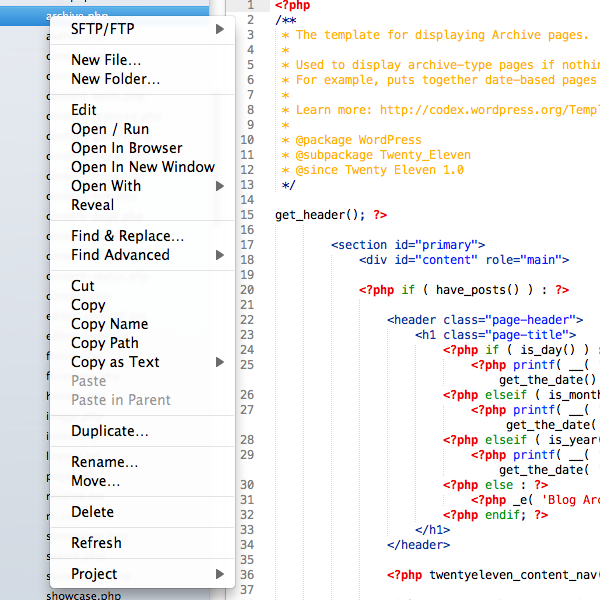 Super-search inside Sublime. Press Cmd+P (Ctrl+P in Windows) and start typing a file name to search it through all the project.
Type : and a number to go to that line.
Type @ and a function/method/variable to go there.
Type # and anything to search it in the document.

This plugin is amazing. Start typing something:

And it will display every possible match, to select it press Enter:

Bam! See how it fills in autocompletes and leaves everything ready for you to replace with your own? All done for you :) What’s also amazing is that it not just gives you PHP main functions but it searches through all the variables, functions, classes and methods you have in all the files of the current Project.

Essential if you work on a lot of HTML, read more here.

Remembers expanded folders and highlights files in collapsed ones.

This article got long! Read the second part for: