A well established white-hat client, which used to get benefited by Google’s Penguin updates (which means Google liked them!), got attacked by negative SEO and has been out of business for nearly a month. Negative SEO is real, very real. And it’s surprising how Google can allow anyone to knock down an established business in just a few hours.

I’ve been working for the past two years with one of my best clients who focuses on a long-term and stable SEO plan by strictly following Google’s Quality Guidelines. After many years working in our industry, we know most of our competitors and have also met some of them in events and seminars. Most of them carry the same practices as us, safe and sound techniques that keep Google happy and provide answers and solutions to what people are searching.

But more often than not, there’s the occasional “get rich quick” guy with a crappy website who jumps to the first SERP positions out of nowhere (with a domain age of a month) until Google releases a new Penguin update and drops him after a few weeks of glory (and rolling eyes from everyone else). That was all we had, the stable websites building quality content slowly and the crazy guy who had a few weeks of success until Google put him where he deserved. Annoying but I guess that’s how the game works… or used to.

Until a few weeks ago when something very strange happened… Google released a new Penguin update which affected not just the typical sporadic guy but also some of the other competitors which had actually been carrying some dodgy tactics too, undetected until then. This Penguin update helped us a lot and moved us a few positions up bringing a nice boost in visits and one of the best times we ever had. While at the same time it shook the whole industry punishing even long standing competitors to the dark side of the SERPs. Until a few days later, an angry competitor decided to attack the top competitors (including us) through negative SEO:

Our first reaction with our client was to immediately check our backlink profile. We checked Google’s Webmaster Tools, Moz and Majestic and none showed anything strange since none of them give recent information (Google is at least 7 days, other tools vary) although the timelapse from the Negative SEO attack to the SERP drop was effective in as little as 48 hours. We couldn’t see what was going on yet but Google had already blacklisted our well-established website in less than 48 hours. So even if we had done everything in our hands and executed it in a perfect manner, we lost:

That’s more than a month out of business without being my client’s fault at all, even Penguin was loving them. And the attack only took a few hours.

Analysis of a Negative SEO Attack

Here’s a chart on the amount of links the site was getting (based on Google’s Webmaster Tool), see how there’s little spikes every now and then? That’s when we published viral content that people liked, shared, commented and mentioned getting an average of 10 inbound links. We also had a quite successful social media campaign and at the end there’s the Negative SEO attack which is insanely mind-blowing at 95 links to our site on the worse day, 100% of them coming from spammy sites. Google, don’t you think this is a bit unnatural? Do you really think we did this on purpose? 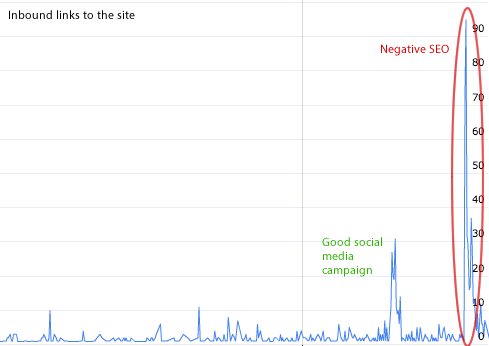 Google reacted immediately by punishing us pretty badly, we used to have an average position of 4 based in our 50 keyword analysis and out of a sudden we where catapulted to page 2 to 4, if you’ve ever been there, it’s like being nowhere.

In the chart below you can see how slow (months and months of hard work involving a huge team of professionals!) it had been to get my client’s website to the Top 5 and how quickly we lost everything with just a few days of the attacker’s work using some script kiddy tool (lower here is better):

This happened just a few days ago and our position is getting worse and worse. We are now waiting for Google to reply to our Reconsideration Request. In the meantime, my client has lost 90% of their business opportunities and they did nothing wrong nor they can do anything else to fix it but wait. Google, negative SEO is very real, easy, fast and super-effective… and you should fix this before it becomes an industry standard.

The reconsideration request was rejected by Google. We had to spend £100 in an external service to reveal toxic backlinks that were not showing in Google’s Webmaster Tools. A negative SEO attack is not just going to ruin your business but also force you to spend extra money to fix it since there’s no free ways of doing it, not even the ones Google provides.

Fixing a “Notice of removal from Google Search” the right way