When ending one of the first missions against the Japanese in Call of Duty 5 and in some other versions like Call of Duty 4 and World at War, the game tells you to “Regroup with your squad” at the Artillery Room but just it happens nothing and you cannot end the mission. 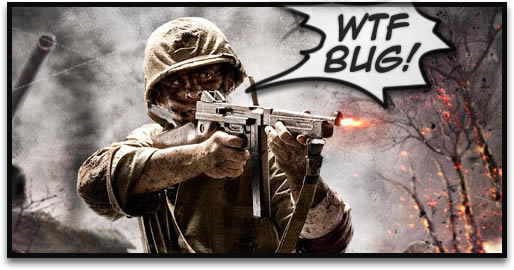 Found it here and thanks to macca_d. The problem is that one of your guys is stuck somewhere at the map, you need to go back (watching out for any Japanese spawns who may shoot at you by surprise, be careful) until approximately the first anti-tank gun. There you will find a member of your squad stuck at the top of the trenches. Shoot at him or throw a grenade so he can move and then just follow him until the artillery room.

It looks like there is a similar problem with a guy that gets stuck at the top of the hill near the start. Sean has provided an alternate solution to this at the comments that seems to work:

If that didn’t help, post what’s happening to you in the comments and we’ll try to find a solution.